Lying on my parent’s bed, my face cradled in my pudgy hands and steel blue eyes wide, I gazed up at my mother as she was putting the finishing touches on her evening’s attire, and like any innocent two-year-old would question as mom slung a purse over her shoulder, I sweetly purred, “Mommy, is that your Gucci?”

There were so many things wrong with my childlike curiosity.  First off, the bag was a Fendi.  The second, more obvious issue was how at two-years-old, the same age at which many of my peers had yet to gurgle words like cookie or poop, my vocabulary consisted of high-end Italian designer labels.  And, I didn’t just throw these words around without understanding their connotations, like a child overhearing an unknowing parent’s accidental expletive, who for the next month will inevitably drop the F-bomb at regular and altogether inappropriate intervals.  At twenty-four months old, I could match accessories, like shoes and bags, to their proper couturier.  I took born to shop to a whole new level. 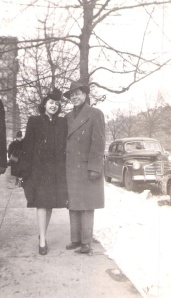 Leona and Stanley Garland, circa 1942

My grandmother Loni has always been my fashion idol and, more importantly, the person whose every word I have lovingly hung onto since the age of two.  When I took inventory of my mother’s accessories like the diaper-clad fashion police, it wasn’t about the clothes, but about my desire to emulate Loni and be a part of all the stories and laughter that was traded between the women in my family.  We all seem to have inherited Loni’s tendency to weave together the past through the clothes we wore, remembering our attire from a particularly memorable life event as though they are the landmarks to find our way back.

So, as Loni would reminisce about the “good ‘ol days” when she was kicked out of the weekly dance at Poe Park in the Bronx with my grandfather because she bravely wore pants when the dress code for women was clearly skirts, the story would somehow become proudly engrained in my childhood brain as my own personal inheritance.  From countless hours around my grandparents’ kitchen table, perched on my knees between my grown-up aunts, I learned the difficult stories about my grandparents’ life and love for each other during the Depression, and at other times, like when I encountered the word “Gucci,” they laughed about the story of a bag, which represented a different life than what my grandparents were born into.

So, chances are, like some kids learn the word bake or knit because Granny has taught them of her two joys, I learned about Gucci because my grandmother told the story of when she received her very first one – and, oh yes, was it joy.  As legend goes, the doorbell rang and my grandmother answered the door knowing that the highly anticipated monogrammed Gucci purse with the bamboo handle had arrived.  Who would have thought that Leona from the Grand Concourse would one day have such a luxury?  My aunt Valerie, who was still in high school at the time, began yelling out the windows in mock excitement, “It’s a Gucci! It’s a Gucci!,” lovingly mocking my grandmother’s delight over her new designer bag.  Loni put the bamboo handled Gucci in retirement many years ago, but it has remained in it’s original box at the top of the closet, one of the few pieces that she is not willing to part with and add to my vintage collection.

At twenty-four months old, after hearing the story that has become female family lore, as far as I was concerned, everyone must have a Gucci…and, I still don’t disagree. Yet, to my naively astute two-year-old mind, the value of the Gucci was not monetary or social standing, but an altogether different status symbol — one in which I was allowed to claim my place around the kitchen table with the women I adored.

Garland Collection was named for my grandparents, Leona and Stanley Garland.

Loni has taught me that being classic is what counts. Here are my go-to’s: 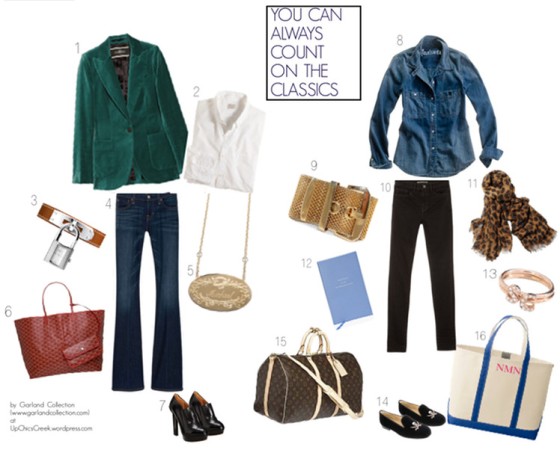 She is also a writer, editor, and stylist covering home, fashion, beauty, travel, food, and lifestyle for major magazines and websites.

Nicole divides her time between New York, Los Angeles, a husband, a talking dog, twin toddler boys, and all of the above.

Merging passions and chaos, Up Chic’s Creek chronicles all that inspires the Garland brand.